In our eaerlier Ryanair price research articles it was shown that buying budget airline (namely Ryanair) tickets too early is not the best strategy. How about the “last minute” price behaviour?

Is it worth waiting for the last minute to buy Ryanair tickets?

What are the chances of finding last minute offers and deals with Ryanair?

To answer these questions we analysed the data which consisted of approx 500K price observations over the period of June 2014-June 2015. The total of 28 Ryanair flights and more than 2000 departures were included in the analysis.

What does "Last Minute" mean?

“Last minute” is a subjective term, so let's define it as any date less or equal to 30 days until departure. The same analysis can be applied to even shorter time windows (1, 2 weeks to departure etc.).

The following analysis method was applied to analyze last minute prices. For each flight, Ryanair ticket price observed 30 days before departure was taken as the baseline. For each consecutive day, the price was compared against the baseline. The price for each date is presented as the percentage of the baseline.

For example, say the price 30 days to departure was £50, 20 days to departure it climbed up to £75. In the current model it is presented as 150% of the baseline. The same approach was applied to all Ryanair flights and all destinations. The final result, which is the average price increase for each day can be seen in the below figure. 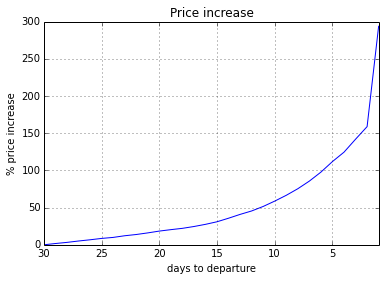 It answers the first question of this study. It is clearly not worth waiting until the last minute when booking Ryanair tickets. In fact the cost of waiting one extra day is at least 1.5% increase of average price. The velocity of Ryanair price raise increases as it gets closed to departure.

These stats are aggregated and the reported increases are based on average prices. Thus overall odds when waititing for the last minute airfare are against you. However there are still chances of finding some last minute deals on concrete flights. The following chart (based on the same data) shows the odds of finding better fare later as it gets closer to the departure. The term “better fare” means cheaper comparing to earlier observation. As an example, let's say the price was £75, £110, £90 on three consecutive days. £90 is better than £110, but it doesn't mean it is a good deal overall.

It can be observed that 30 days before departure there are still 51% chances of finding a better last minute fare later, but the odds sharply decline as days pass by.

Last minute Ryanair airfare patterns are built into Airhint cheap flights predictor algorithm, which can be used to find the best moment for booking Ryanair tickets.